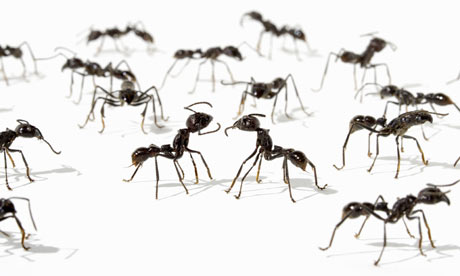 Controlling Ants when they become pests

Of the many and varied species of ant that exist in the world, the ones that you’re most likely to find in the UK are garden ants, pharaoh’s ants and ghost ants.

Also known as common ants or black ants, these are the most commonly found type of ant in the UK. They are black/brown in colour and worker ants are usually about 3-4mm long.

Garden Ants are usually found nesting outdoors in lawns, flower beds, beneath paving slabs, and at the base of walls. They become a pest when worker ants forage into premise foraging for food, especially sweet foods. Their strong pincers can slowly eat through wood, grout in tiling, door seals, and even cement.

During summer, the winged females (queens) and males leave the nest on one or two warm afternoons and take flight, during which they mate. A new colony starts when a mated winged female digs into the earth to overwinter and start a new colony in the spring.

Sometimes referred to as the black-headed ant, this very small, almost translucent pale coloured ant is just 1.5mm long. While not as common as the Pharaoh’s or Garden ants, they can be very difficult to eradicate due to the extent to which the worker forage and the multiple subcolonies and queens they have in each colony. They like warmer climates and sweet food-stuffs so they are often found in larger housing estates and constantly warmed institutions such as hospitals.

A small golden yellow ant about 2mm in length with a double segmented waist and a darkened tip to the abdomen.
The Pharaoh’s ant is of tropical origin, so in temperate climates like the UK, it is an indoor species, most often found in large facilities such as hospitals, prisons, and blocks of flats. They are most often found near sources of water such as kitchens and bathrooms. Conventional treatment is not effective with these ants as they have a system whereby new queens can be produced if the old queen is killed. It really is important to call in the experts should you find a Pharaoh’s nest in your home or place of work.

At Pest-a-Lance, every treatment is bespoke because no two infestations are the same. After a free survey, we will outline what needs to be done to eradicate the infestation and make all the costs clear and upfront before we perform any work. We perform a thorough risk assessment before using pesticides and all our technicians are fully qualified in the safe use of pesticides.