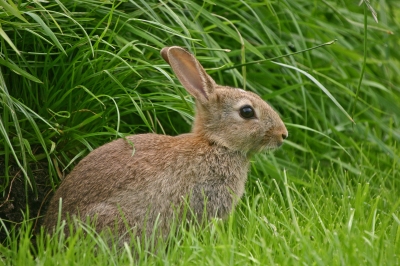 Why are Rabbits a problem? The rabbit is found across almost all of Western Europe and is thought to have been introduced to Britain by the Normans (though there are some indications that it could have been introduced as early as Roman times!) Rabbits can grow to around 40cm in length and are distinguished from hares by their size (hares are larger). Rabbits have a white tail which shows when running, smaller back legs, and lacks the tell-tail black tips found on the eras of the hare.

Though generally cute and cuddly they quickly become pests when their numbers expand and they destroy plant life such as gardens and crops. Rabbits are notoriously fast at reproducing! They reach sexual maturity in 2-3 months and have a gestation period of just 28 days, up to five litters per year are possible and with an average litter size of around five, it is easy to see how, when left uncontrolled, the rabbit population can explode! With all these new mouths to feed, the rabbits can turn from being a mild nuisance to a menace that could destroy a farmer’s crop or a beloved garden in days.